Today marks the 100th birthday of Satyajit Ray. Needless to say, I am a big admirer of his work since my boyhood. Feluda and Professor Shonku holds a big piece of my heart even now. As I’m writing this, the Feluda Shomogro is right behind my laptop sitting inside a pile of books calling me to go through the stories all over again. I started getting more invested into his other area of works from 2011 when I first saw Pather Panchali. And, the deep admiration for his work and for Satyajit continues from that point onwards. It’s very recently that I got more interested into the ideological viewpoints of Satyajit and its corresponding impact into his work. I’m just trying here to put together some pieces and construct an understanding on where Satyajit stood with his ideologies and how or if they impacted his great works.

It is typically considered that Satyajit’s films had more humanistic approach on the characters and was refrained from any politics or idiosyncrasy. His films always explored the human complexity and its universality rather than any ideology. He did not have any specific commitment like Ritwik Ghatak or Mrinal Sen did on Marxism. To understand Satyajit’s ideology, we rather have to look from another viewpoint as it only makes sense.

In the first decade of his film direction, Satyajit came up with marvellous films like Apu Trilogy, Jalsaghar, and Charulata. This was also the last decade of the premiership of Nehru, whose support for Satyajit’s films was both personal and institutional. Even in an interview in 1970 [Cardullo’s ‘Satyajit Ray: Interviews’], Satyajit expressed his admiration for Nehru and very specifically for Nehru’s secularist nationalism, cosmopolitanism, interest in social reform, and faith in reason, science, and progress. This is the opening point from where we can start looking at Satyajit’s works more closely.

Let’s start with the Apu Trilogy which was actually derived from Bibhutibhushan Bandyopadhyay’s two novels. In Bibhutibhushan’s novels, the progression of the story was completely cyclical or regenerative. As Apu’s life goes on, his childhood still doesn’t go away. The tale ends at Aparajito where Apu leaves his son Kajal in Nischindipur, where the story originally started. In the novels, it was painted that time does move forward but brings us back to where we started.

However, while Satyajit adapted the novels for his films, the nature of time and progression had a different tone. Nischindipur was never seen in the trilogy from the point Apu left it. And in the end, Apu actually took Kajal back to Kolkata and not back in Nischindipur. Apu’s narrative in the films was more relatable to Nehru’s nationalistic progressive narrative and the one he dreamt for India. Apu was seen more of a cosmopolitan who faces problems in life but solves them with rationality and reasons.

Such reflections of cosmopolitanism can also be seen in the other works of Satyajit during that time such as Jalsaghar or Mahanagar. There wasn’t any inflection into the nature of narratives during the 60s when the political standpoint of Nehru was largely in jeopardy due to the massive unemployment and economic turmoil. But, few of those pictures were painted into the films Satyajit made during the 60s. But then again, he designed those narratives while keeping a somewhat ‘hopeful’ ending to each one. Mahanagar is the perfect example for this.

Moving forward, Satyajit never really had a good eye for Indira Gandhi and that was proven many times. It also was reflected into his works after 1967, such as in the Calcutta trilogy. Through this, he explored and demonstrated how the Marxists were sold out to the corporates leaning towards a generation incapable of leading a nation. The hopefulness narrative was completely absent from the works during this time because such hope for progression and cosmopolitanism pretty much fade away from India by then due to the nature of Indira Gandhi’s political approaches. 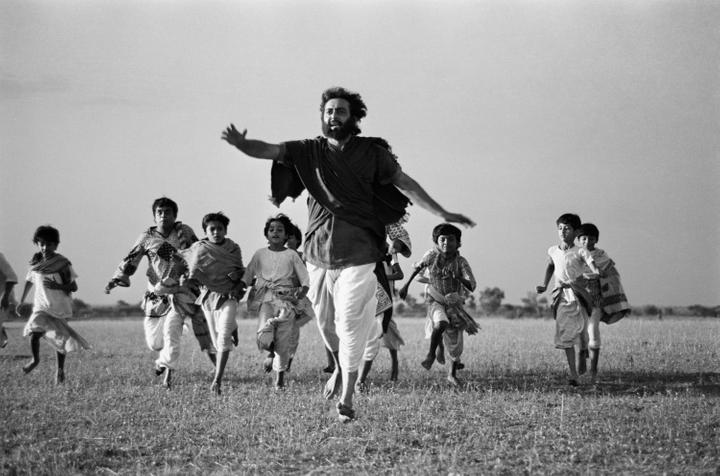 That earlier version of Satyajit was never really seen through his works anymore. Few of those films explored the bourgeois exploitation and damnation of the Indian elites. Hirok Rajar Deshe explored the brawl between totalitarianism and liberalism. The comical expressions in Jana Aranya leads us to a more conflicted characteristics of liberalism.

However, there was an interesting event in Ghare Baire which came out in 1984. As we know, it was based on the very controversial novel of Rabindranath Tagore. This story engages into a constructive partition against xenophobia and radical nationalism. While Rabindranath ended this novel unsolved where the protagonist Nikhil was hurt when he was engaged into a Hindo-Muslim riot, Satyajit actually killed Nikhil during that riot. The film portrayed how the dreams of a liberal died along with leaving his counterpart in dissolution. But then again, there wasn’t any directly implication of the old Satyajit of secularism, progression, individualism, or cosmopolitanism.

It’s at the very last film of Satyajit where we might find a true understanding of where Satyajit stood in terms of his ideological viewpoint. In Aguntuk (which came out in 1991, a year before his death), Satyajit both rejected the contemporary liberalism and the mainstream Indian nationalism. He rather pointed us towards the tribals indicating where true nationalism actually rests upon. In the end, Satyajit refused to accept the conviction of Nehru’s progressive ideological autonomy. He also denied the provisions of a bourgeois-enabled prosperity.

Is it really very simple to make a COVID-19 vaccine and distribute it worldwide?